Guest Article written by Piyush Rahate – here’s a little something about him in his own words:

Inspired by the complexity surrounding us and by the fact that there could be simple solutions to everything, Piyush is working to create a significant difference in how software delivery is done; inspiring others and staying humble.

He is Professional Scrum Trainer and a SAFe Program Consultant; but before that he is an engineer with over 14 years of experience, who loves fixing code, writing poetry and clicking photographs.

As many Professional Scrum Trainers have experienced, there is always a good discussion around the Sprint Goal. A similar discussion recently led me to address this not so well understood aspect. Of-course, I cannot say on behalf of Ken and Jeff, why they kept Sprint Goal out of the 11 essentials, I would like to present my thoughts on the same.

Before that, let us start by understanding what the Sprint Goal is, so that we all are on the same page.

An objective that is crafted by the Scrum Team during the Sprint planning session, which provides an overarching guidance to the Scrum Team as to WHY they are investing their time, money and effort into the Sprint. 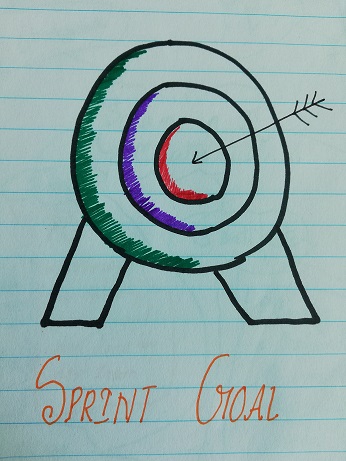 From the Scrum Guide:

Why the Sprint Goal is not an artifact among the 11 essentials:

Scrum, is not prescriptive and the Scrum Guide reflects the same philosophy. To start doing Scrum the 11 elements – 3 Roles, 3 Artifacts and 5 Events are good enough. Again, as Scrum thrives on self-organizing teams, allowing them to decide on what serves their purpose and maximizes the impact of Scrum in their context, is of more value than telling the teams what needs to be done.

The Scrum Guide has evolved over time. The earliest edition of the Scrum Guide was bit more prescriptive. It cites the chicken and pig story, talks about burndowns etc. As a result, there were some anti-patterns observed. Teams fell into the trap of following only things mentioned in Scrum Guide. The idea, however was never that. The idea was to create self-organizing teams that could find what works for them, inspect and adapt.

Sprint Goal has been an integral part of Sprint Planning since the beginning; the Scrum team crafts it and it is one of the outcomes of Sprint Planning. If we read through the Scrum Guide, Sprint Goal/Goal is mentioned about 37 times which is equal to number of mentions of Product Owner and is more than the number of mentions of Scrum Master. If we just look about for the specific word Sprint Goal it is mentioned more than Sprint Backlog itself. This clearly indicates and emphasizes that Sprint Goal is an integral part of the Scrum framework; however it is left for the Scrum Teams to discover its importance and use it to their advantage.

Not making it mandatory also allows teams to be flexible and decide whether it makes sense for them to have a Sprint Goal or not. What if, the Sprint Goal is made mandatory as an artifact and the teams start defining the scope of the sprint as a goal (I have seen many teams doing that) to be achieved to be in adherence to Scrum; what purpose would it solve?

Remember, Scrum is not about being prescriptive, it is about providing an environment where self-organizing teams can thrive and choose what works best for them. And for that matter, the 11 essentials are minimal but sufficient.

Although,  the Sprint Goal is not defined as an artifact within the Scrum Guide it is an integral part of the Scrum framework. It provides an overarching objective for the Scrum Team which helps them to focus “WHY” is the team invested in the Sprint.